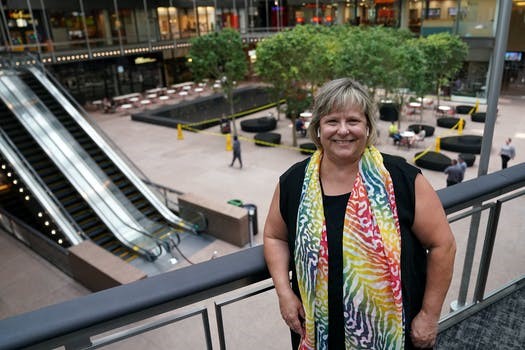 Spiffed-up atrium at IDS Center reopens with ‘more serenity,’ cozier places to lounge as workers trickle back to downtown Minneapolis

In its first overhaul in more than two decades, the Crystal Court underwent an eight-month, $5-million makeover.

After eight months of construction and a $5 million makeover, IDS Center is rolling out a jazzy new welcome mat for returning office workers.

The building’s expansive Crystal Court urban park in the heart of downtown Minneapolis has undergone its first renovations in 23 years, with upgrades many hope will herald signs of vibrancy in an area badly hurt by the coronavirus pandemic and civil unrest.

“After a very challenging year for our community, we are all thrilled to celebrate this reopening,” said Deb Kolar, Accesso’s IDS general manager, during a recent tour. “I look forward to seeing this space full of people again.”

IDS’ once-bustling Crystal Court, at S. 8th Street and Nicollet Mall, has been walled off since November while architects from Perkins & Will, Greiner Construction, McCaren Designs and others updated the hub of the 57-story office tower.

The goal was to bring an airy feeling of serenity into the urban core.

They replaced a 50-foot waterfall with a soothing infinity-edge reflection pool and installed 12 towering Ficus trees that grow straight from the floor. There are now rows of round lunch tables with wire backed seating.

Near the infinity pool, black modular seating pods replace white benches, and resemble pebbles when viewed from the skyway or overhead office windows that peer into the eight-story atrium.

Bob White, who owns Hubert White men’s clothing store on first floor of the IDS, said the reopening of Crystal Court is an important milestone for downtown. Rioters smashed windows to the upscale men’s retailer after George Floyd’s killing and the boards came down only a month ago.

“It will be a wonderful, wonderful thing for the Crystal Court and us,” White said of the atrium’s reopening. “It may not be a game changer, but it reaffirms that things are returning to normaland that the landlord is willing to invest.”

Built in 1972, the skyscraper has 1,600 office tower tenants and nearly 2 million square feet of retail and office space. IDS management worked with restaurants, shop owners and the other tenants to delay or forgive months of rent while the pandemic dragged on.

Retailers are hoping the renovation will draw money yielding-crowds.

The Crystal Court reopening “kind of aligns with our reopening, so we are super excited,” said Nico Nieto, vice president of brand and marketing for the Chicago-based Roti Modern Mediterranean restaurant. The ground-floor eatery reopened last week after a 17-month shutdown.

Business across the Roti’s 42 stores nationwide plunged 70 to 80% during COVID-19. With workers returning to Minneapolis’s urban core and to IDS’ upstairs offices, Nieto expects Roti’s annual sales to surpass 2019 revenues by 40%.

“People are more ready to go back to work,” he said. “We have missed them. It has been a year and a half. And we cannot wait.”

Angela Lamb-Onayiga can’t wait either. “I am extremely excited [about the Crystal Court reopening] because I know that this will bring in traffic to our store,” she said.

She and her co-owners relocated Sistah Co-op fashion store into IDS’ skyway level May 1, after their previous store, across the street in Gaviidae Common, shut for 15 months due to COVID-19 and a dearth of shoppers.

But when Sistah Co-op first opened in IDS, the skyway was still pretty empty. “I walked around and said, ‘Oh, my goodness! I hope we can pull this together,’ ” she said.

IDS’ tenant occupancy rate plunged to 25% during the pandemic and pedestrian traffic became a trickle. Since last month, however, 50% of IDS’ workforce returned as vaccine rates rose and government restrictions dissolved, Kolar said.

After losing Banana Republic and the consumer electronics repair store Gophermods, a number of new businesses are coming. Among them are California-based Noa restaurant, which will open this fall in the former Mission American Kitchen, which closed its doors in March 2020 after 17 years in IDS.

Kolar greeted construction crews Tuesday as they braved ladders and scissor lifts to install lighting in trees and replace Crystal Court’s “Coming soon” signs with ones that shout “We’re open!”

Building Superintendent Jeff Grubb appeared to walk on water as he marched across the black infinity pool, sweeping silt off the newly installed basin. The visual trick won him a high-five from Kolar.

City officials say the renewed Crystal Court is one more reason to stroll into downtown and through the bottom floors of the skyscraper. A daylong celebration Thursday includes prizes, music and appearances by city officials and leaders of the project.

“Overall this iconic property is central to the revitalization of downtown,” said Minneapolis City Council Member Lisa Goodman, who represents the area. “This large investment and beautiful improvement to their public spaces is an invitation to all of us to come back downtown to work, play and live.”

Debbie Schuhwerch walked with two friends from her job at U.S. Bancorp Center earlier this week to grab Starbucks coffee, sit and catch up in the new Crystal Court.

“I’m just really happy that they are making places for people to come back to,” she said.

Looking around at the 50 or so people scattered across the court’s lounge and eating areas, Schuhwerch smiled. “It’s just important to have welcoming places.”